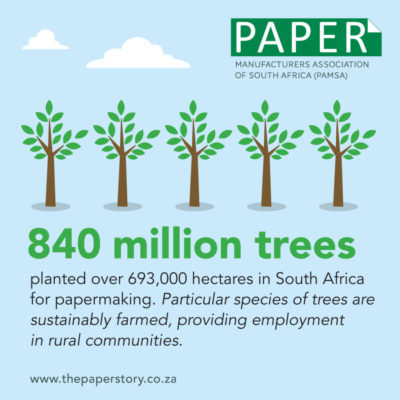 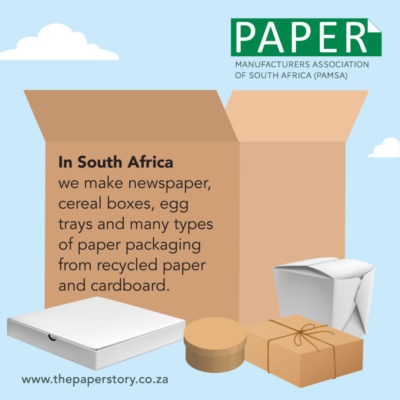 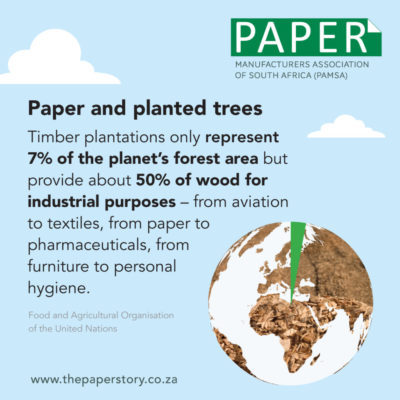 JOHANNESBURG (5 June, 2018, World Environment Day) — The Paper Recycling Association of South Africa (RecyclePaperZA) has announced the 2017 paper recycling rates. Last year the paper recycling industry along with conscientious consumers and thousands of collectors kept 1,3 million tonnes of paper and paper, boxes and liquid packaging out of landfill. This would fill 1,539 Olympic-sized swimming pools.

This tonnage represents 70% of the 1,8 million tonnes of paper available for recovery, which excludes books and archived records, and unrecyclable paper like toilet tissue.

“We are delighted with our latest statistics as it shows us that people are recycling more,” says Ursula Henneberry, RecyclePaperZA operations director. In 2015, the association set a target of 70% by the year 2020, and this has been achieved three years early.

In the past six years alone, more than seven million tonnes of paper and paper packaging have been recovered for recycling. If baled, this amount would cover the surface of 1,273 soccer fields, one metre deep. “The unsung heroes are our country’s recycling collectors along with industry players who operate collection and drop-off schemes as well as buy back centres,” notes Henneberry.

“While our recovery rate has increased, there has been a drop in local consumption particularly in printing and writing grades, so much so that a newsprint paper machine was closed down last year,” remarks Jane Molony, executive director of the Paper Manufacturers Association of South Africa (PAMSA). This has resulted in a slight drop in the actual tonnage from 1,4 million tonnes to 1,3 million tonnes.

“This decline is however in line with international trends,” adds Molony. The average annual per person consumption in South Africa has dropped from around 50kg in 2011 to close to 40kg in 2017. Some of this reduction is attributable to cost saving, electronic media substitution and the country’s weak economic growth.

The paper packaging industry does not need another tax

Commenting on the Section 28 notice1 (published on 6 December 2017) calling for Industry Waste Management Plans, PAMSA asserts that the private sector consistently invests in voluntary waste management initiatives without it being mandatory. “We would prefer not to have mandatory taxes as these will increase the price of packaging. And our economy and already cash-strapped consumers cannot afford additional costs,” explains Molony.

In addition the objectives of the notice will not be met through more taxes but rather through strengthening existing partnerships between industry, municipalities, the Department of Environmental Affairs and other public institutions. It is through partnerships with the likes of the Fibre Processessing and Manufacturing (FP&M) SETA that RecyclePaperZA have trained over 6,000 recycling collectors and entrepreneurs since 2010.RecyclePaperZA has also worked with the FP&M SETA and the Quality Council for Trades and Occupations to formalise the qualifications that these entrepeneurs receive.

According to Statistics SA, there has been a substantial increase of jobs in the paper recycling sector from 2016 to 2017, which has been buoyed by robust demand from paper mills.

The sector has the capacity to process all the waste paper it collects and less than 5% was exported in 2017. As a result, South Africa is less vulnerable to the vagaries of the international waste paper market and although China’s moratorium on waste paper imports did have some impact, it was neglible compared with the likes of that in the USA and the UK.

“As an industry, we embark on numerous awareness drives, promoting better separation-at-source to reduce the contamination of waste paper and provide a better quality fibre for paper manufacturers,” Molony concludes.

1 A notice in terms of section 28 of the National Environmental Management: Waste Act, 2008 (Act No 59 of 2008) (Notice) was published on 6 December 2017.  Each packaging waste stream will have to submit an Industry Waste Management Plan (IndWMP) to the Minister by September 2018. According to the Notice, the Waste Bureau will oversee these plans and a tax will be collected by SARS to implement the IndWMPs.